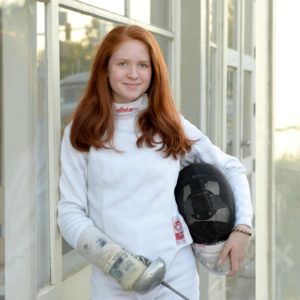 In 2008, I watched Mariel Zagunis win a gold medal in the Beijing Olympics and told my parents that I wanted to be a fencer. My dad told me that he was not going to drive me up to Portland three to four days a week to fence. I was online a few months later and found out that Salem had its own salle and started fencing foil and epee at Salem Classical Fencing. For the last three years, I have been training in Beaverton with Cody and the NWFC family. I have been fortunate enough to earn several national medals and travel to some international competitions, but I am most thankful for the exceptional coaches and friends I have made through the sport. I look forward to fencing for Cornell University next year and continuing the NWFC legacy.