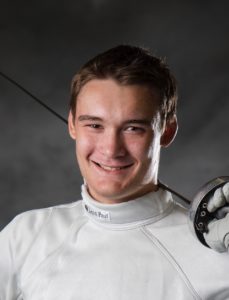 When Henry was 14, he wandered into a small club in Albuquerque, Duke City Fencing, where a visiting coach named Cody Mattern offered him a free lesson. Henry jumped at the chance, and was instantly hooked on the sport. Two years later, his family moved to Oregon so Henry could train at NWFC. With the support of his coaches and teammates, he’s earned six national medals, fenced in four World Cups, and helped the US National Team win gold at the 2017 Pan Ams. He’s looking forward to fencing for Ohio State next year, where he will major in linguistics.